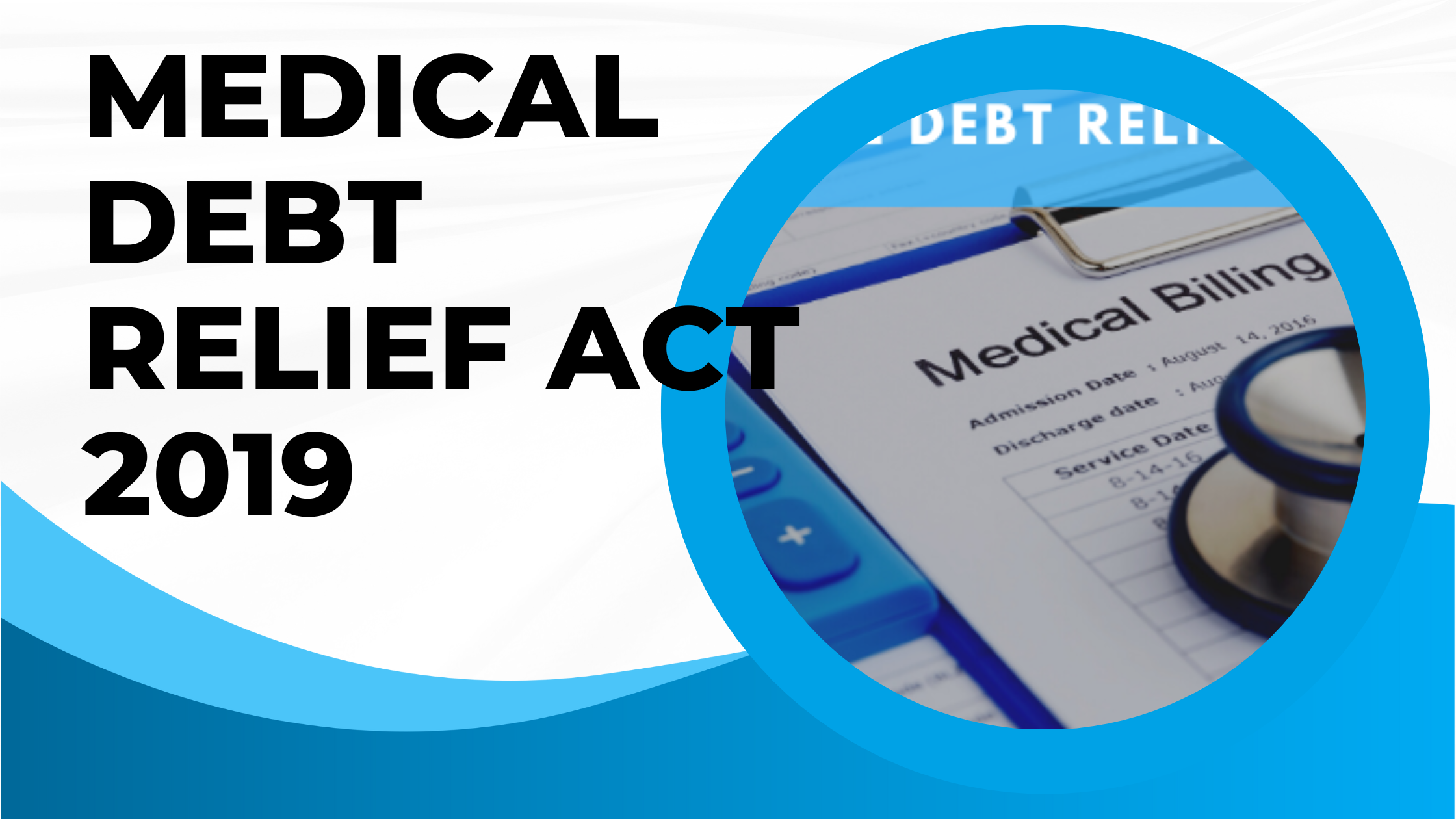 The Medical Debt Relief Act of 2019

The Medical Debt Relief Act was introduced by Senator Jeff Merkley, D-Oregon, in May 2019. The Act makes changes to the Fair Debt Collection Practices Act of 1978.

The amendment controls when debts for medical bills can be reported to credit reporting agencies. The Act says that reporting consumer debt by medical creditors requires a 1-year waiting period before the unpaid debt can be reported. This delay in reporting provides consumers with medical debts the opportunity to resolve those debts before their credit rating is affected.

The Bill’s purpose is:

“To amend the Fair Credit Reporting Act to institute a 1-year waiting period before medical debt will be reported on a consumer’s credit report and to remove paid-off and settled medical debts from credit reports that have been fully paid or settled, to amend the Fair Debt Collection Practices Act to provide a timetable for verification of medical debt and to increase the efficiency of credit markets with more perfect information and for other purposes”.

The bill amends Section 605(a) of the Fair Credit Reporting Act by adding the following citation at the end:

“(9) Any information relating to a medical debt if the date on which the debt was placed for collection, charged to profit or loss, or subjected to any similar action antedates the report by less than 1 year”

It also adds the following warning:

“(10) Any information relating to a fully paid or settled medical debt that had been characterized as delinquent, charged-off, or in collection which, from the date of payment or settlement, antedates the report by more than 45 days.”

Purpose Of The Medical Relief Act

Over time, consumers have encountered many difficulties in their efforts to repay, adjudicate, and otherwise discharge medical debts. The challenge is partly due to the nature of medical debts, how they accumulate, and how insurance providers and consumers pay those debts.

The Medical Debt Relief Act was created to give consumers a waiting period for reporting debts to credit reporting agencies. The act also allows consumers to resolve medical debt issues for one year after the debt started.

The bill’s sponsors want to give consumers enough time to deal with medical debts without damaging their credit report ratings. Due to the time, it may take to pay medical debts and the time required to correct any billing errors or disputes, the time for notification of credit reporting agencies of medically-related debts will assist consumers by not damaging important credit rating reports and information.

The extra time allows the complex and often time-consuming process of medical billing and payments to process conflicts with credit reporting protocols for many medical credit-extending entities and organizations. The Medical Debt Relief Act seeks to create a suitable timeframe for administrative and financial activities.

The hope is that it will not negatively affect a consumer’s credit report or rating. The waiting period is a way to level the playing field between medical creditors and debtors. By creating a one-year delay, each party can work on satisfying any amounts in the dispute or the payment process by insurers and others.

Senate bill S-1581 is designed to provide a period in which consumers can resolve, pay off, or otherwise adjudicate medical bills for themselves and family members. There is great importance attached to a consumer credit rating and the potential amount, complexity, and considerations that are factors in reporting medical debts.

Therefore the Senators created a bill that would provide temporary relief from negative credit information being reported to the credit information and reporting agencies. Many consumers suffer financial difficulties, including higher costs for rent, insurance, and other everyday expenses due to an unfavorable credit rating or credit report.

By initiating legislation to remedy the situation of reporting medical debt temporarily, the Senators wish to create Federal laws. These laws will limit creditors, collection agencies, and other reporting entities from placing negative data into consumer credit records. This legislation is expected to lead to fewer conflicts between the parties that can cause severe financial distress unnecessarily.

Consumers with medical debts would gain the ability to resolve debts, while collection agents would have a harder time supplying negative data to credit reporting agencies. The bill also limits the power against consumers by the threat of having negative information submitted to credit reporting agencies for failing to pay or resolve medical debts quickly.

Presently, Senate bill S-1581 remains with the Senate Committee on Banking, Housing, and Urban Affairs. The Bill awaits discussion and any modifications before emerging on the floor of the Senate for debate and approval. The bill will be submitted to the House of Representatives upon approval.

From the House of Representatives, it will be forwarded to a House Committee for review and any modifications before advancing to the House floor for debate and approval. Currently, there is no definitive time frame for estimating the bill’s appearance on the Senate floor.

Consumer advocacy groups see the Medical Debt Relief Act as an essential step forward. It will create a more friendly and fair atmosphere in which to regulate and monitor the activities of medical creditors, collection agencies, and consumers attempting to reconcile, repay, and act responsibly concerning medical debts.

When someone uses medical care, there is much complexity and distribution of information created. The intricacies involved in reviewing, discussing, and determining responsible parties for medical expenses can be time-consuming. As a result of the inefficiencies in processing documents and information, medical care providers have difficulty keeping up with the administrative aspects of assigning and collecting payments and debts.

Medical creditors, third-party collection agencies, and other sources of medically-related debts are concerned. There will be a delay in reporting negative credit information to the credit reporting agencies, which will present issues that will prevent collecting debts fairly and efficiently.

The inability to report negative credit information to credit reporting agencies removes a vital leverage tool for receiving prompt payment on debts. Failure to report harmful data reduces the value of the information and its timely documentation to be used by current and potential creditors making financial decisions.

There are additional restrictions on credit reporting by medical care providers. There are concerns the medical community will alter the terms and conditions under which they operate with insurance companies, patients, and third-party debt collection agencies.

Passage of Senate bill S-1581 is expected to remove many issues consumers face in solving issues related to medical debts. The bill will not alter the current legislation regarding general consumer debts, debt reporting protocols, and debt resolution practices.

Consumer credit continues to be an essential tool in modern financial life. The ability to understand how best to deal with medical debts, as well as the opportunity to gain control over credit data reporting protocols, grants consumers the best chance to engage in the process without the fear of immediate financial impact. If the bill passes, it should create an atmosphere where everybody acts in a more respectful and focused basis.

The proposal should reduce conflicts and pave the way for fairer and more conducive communications between medical creditors and debtors.

What is a Risk and Financial Advisor?

What Is a Fully Amortized Loan?

How Many Personal Loans Can You Have at Once?

How Many Times Can You Take a VA Loan?

Using a Personal Loan for a Down Payment

What Is a Non-Conventional Loan?

Debt Consolidation vs. Bankruptcy – Which is Better?