Taking Money From a 401K- What You Need to Know 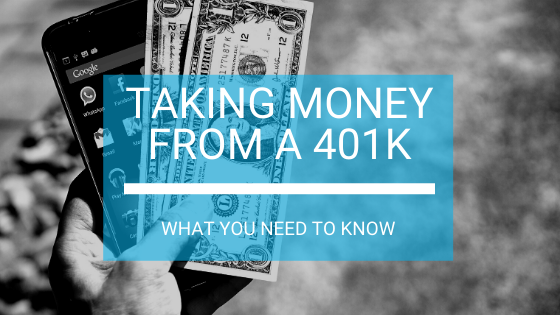 If you have a 401K plan, you may be able to take money out of the account. Many people who have debt want to know the advantages and disadvantages of taking money out of 401k to pay debt. It can make sense in some cases. However, it is also endangering your retirement so you need to think carefully if it makes sense.

In the first place, you need to know whether you are eligible to withdraw funds from the account. In most cases, you can only withdraw elective-deferral contributions. These are the deposits that you have made and not what your employer has contributed. If your employer also contributes to your retirement plan, you won’t be able to withdraw this money. The only exception to this rule is if you’re withdrawing the money for early retirement.

Additionally, depending on your plan, you may not be able to withdraw money at all. Some plans only allow for withdrawals in the case of hardship situations such as tuition, medical expenses, preventing eviction from your home, or necessary home repairs. In some cases, debt may be considered an eligible hardship so always review your plan carefully.

Depending on the type of debt that you have, it might be beneficial in the long run to cash out a portion of a 401K. For example, if you have a loan that has a high-interest rate such as 18-20%, it might be worth the penalties. However, you should always calculate the interest costs in addition to the tax penalties to decide which option makes more financial sense. If you have a financial advisor with the plan, they can help you crunch the numbers and make the best choice.

If you have a relatively large starting balance, withdrawing from your plan may not make a huge difference in the long run. This means that if you have a fair amount of credit card debt at a high-interest rate but won’t have to withdraw a huge amount from your 401K, then this might be a smarter option. Many people who have paid well into their 401K plans have a good balance that will carry them into retirement so withdrawing a smaller amount won’t set them back much or at all. If this is the case, a withdrawal may be the smarter choice.

An advantage of taking out money when you’re young to pay off debt is that it can set you up for better financial health in the future. If you’re going to be growing in your career and income, then you’ll be able to put more money into the 401K, lessening the impact of withdrawing money at present. While you should always be cautious with taking money from retirement, debt can be an anchor that impacts your current life. Student debt and credit card debt, for example, can lead to bad credit and keep you from being able to afford a house or other important investments. If taking money from retirement makes you financially healthier in the future, it may be the better choice.

One of the primary disadvantages of withdrawing early is that you’ll have to pay income tax in addition to a 10% penalty. For example, if you take out 45K to pay off debt, you’ll have to pay 4.5K just as the early withdrawal penalty. If your 401K contribution was made tax-free, you’ll then have to pay federal income tax on this withdrawal. This can mean that you’re getting only a portion of the money that you’re withdrawing. Having to pay the penalties and taxes might not make the withdrawal worth your while.

One disadvantage that’s harder to calculate is that it may be tempting to withdraw again. If you’re tapped into your funds for an emergency situation, then it’s more likely that you’re going to do it again. Not everyone has this problem but constantly dipping into your 401K is going to cause you problems in the long run. People who do this may find that their retirement nest egg is severely depleted. If you’re worried about starting a bad habit, then it may make sense to avoid doing this if at all possible.

Depending on your plan, you might end up causing problems for yourself down the road financially. Whatever money that you take from the 401k obviously won’t be available for you at retirement. Since the earnings in the 401K are growing tax-deferred, the amount that you take out now could be significantly more at retirement, especially if you take out money when you’re fairly young. The plan might also prevent you from making any contributions for six months after your withdrawal so you’ll lose the benefit of those contributions as well.

Another disadvantage is that taking money from the 401K may put you into a higher tax bracket. Any money that you withdraw will be considered part of your income. This means that if you withdraw 40K, you might be taxed as a higher income person, which can significantly impact how much you’re getting. Depending on your current income level, it might be a worse choice for you to withdraw this money. If you can get by with taking out a smaller amount though, you may still be in the same tax bracket so always calculate where you are before making a decision.

Although taking a withdrawal from a 401K isn’t always a bad choice, it’s not a decision that should be made without careful consideration. If you’re not sure of the best financial choice, consider meeting with a financial advisor and going through the calculations to determine your best option. In some cases, there may be other options such as taking a loan from the 401K. The primary takeaway is that if your withdrawing now will put your long-term financial health in jeopardy, you should probably seek out other options to handle current debt. Consider your options carefully to ensure that you understand the implications of both before you make a decision.

Mistakes to Avoid when Buying Into A Business

403b vs IRA: Which Retirement Plan Is Best?

Can You Buy and Sell Stock on the Same Day

Stock Basics: What Happens When You Buy a Stock

How Old Do You Have to Be to Invest in Stocks?

What Is a Contributory IRA? Tax Benefits and Investment Options

How Many IRAs Can You Have? IRA Types and Contribution Limits

Roth IRA Pros and Cons: Is It Right for You?

How do I Find Foreclosed Mobile Homes?

What Is A Mutual Fund?

The Benefits and Pitfalls of Penny Stock Trading